Donor Stories: Why I Support AMIS

Through simple, targeted, rapid response efforts, AMIS, Inc. organizes support for Northeast Ohio immigrants in crisis. Our grassroots network of allies and advocates come together through local events and giving campaigns to ease the financial burden for individuals and families who have immigrated to the United States.

To learn how you can support current immigrant needs click here and to learn about our past efforts and successes, click here.

The mission of AMIS is to inspire hope and contribute to the well-being of immigrants and families as they seek legal status in the United States by assisting with resources for legal services, education, basic living expenses, and self-sufficiency. 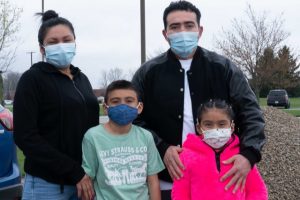 AMIS supports many individuals through the difficult and long process of seeking asylum in the US. Most of those immigrating here don’t realize how broken the system is nor the process and length of time it takes to obtain legal status. Seldom do we have a win to celebrate. Thanks to the perseverance and hard work of two attorneys and AMIS supporters, however – we finally do!

Walter Malara Martinez first came from El Salvador to the US border in 2008. At the time he was a single father who came looking for work to support his family. He couldn’t stay and was deported shortly after his arrival. In 2017, he again made the dangerous trek to the border this time to flee gang violence and extortion, both of which are rampant in El Salvador.

He was jailed, not for committing a crime, but for presenting himself at the Mexican border to ask for asylum. Bear in mind, seeking asylum is a right guaranteed by US Immigration law. Since Malara Martinez was deported once before, he was deemed to be ineligible for bond (the normal process used while a case is being considered) and was imprisoned right away.

After being detained in Tijuana, Immigration and Customs Enforcement (ICE) sent him to jail in Youngstown, Ohio. Why, you may ask, was he sent all the way to Ohio? ICE has contracts with private prisons across the US and indiscriminately sends those detained to whatever facility has space at the time. Regrettably, unlike prisons in the South, in Northeast Ohio there isn’t a large network of nonprofits and attorneys working on asylum cases. Consequently, Malara Martinez was forced to represent himself. The system doesn’t provide a defense or any support if one cannot pay to hire legal representation. The process seems to assume that a newly arrived immigrant who had fled persecution, had the opportunity to put together a case ahead of time and then carry all of their evidence with them while escaping violence in their home country. Our process then assumes that they have the resources needed to successfully navigate the US legal system in another language in order to achieve asylum.

Brian Hoffman, an immigration attorney, initially met with Mr. Martinez to review his case summary and help find a pro-bono attorney to assist him. However, no one was found to take on his case and Hoffman knew that the likelihood of Mr. Martine winning asylum without representation was low. As predicted, a judge soon reviewed his case and ruled that, although he had been a victim of crime, he had not been persecuted (the key factor which must be established to win an asylum case). Hoffman decided to take on Mr. Martinez’s appeal, working with Gino Scarselli, a Columbus-based attorney. Both undertook their work as volunteers to appeal the decision, initially thinking it would entail about 30 hours. Instead, they devoted nearly four years and countless pro-bono hours of diligently fighting to finally get the decision overturned.

Malara Martinez ended up spending over three years in jail while his pro-bono attorneys worked on winning not one but four appeal cases in the 6th district circuit simultaneously, each of which would typically accrue about $6,000 in legal fees. The two had to find, prepare, and submit five separate expert witnesses testify statements on their client’s behalf. Over 1,000 pages of court transcripts later, it is abundantly clear that Mr. Martinez never could have navigated such a convoluted legal processes and win his multiple appeals without the assistance of experienced immigration attorneys to guide him through it.

Hoffman said he litigated the case to make a point: someone fleeing the central triangle—the term used to describe the Central American countries of Guatemala, Honduras, and El Salzador—can in fact, prove a credible claim for asylum. However, doing so is not easy, with the government making the process of obtaining asylum nearly insurmountable, thereby prompting many to just give up and willingly accept deportation or spend years in incarceration.

Throughout this process, AMIS assisted Malara Martinez in two important ways over the last few years. From an advocacy perspective, AMIS Board President Anne Hill worked with the Heights Friends of Immigrants to organize a phone call campaign intended to pressure ICE into releasing Mr. Martinez after 3+ years of imprisonment. During a week-long campaign, concerned citizens called to draw attention to his case and demand his release. Ultimately, the efforts paid off and he was finally able to reunite with his family, all of whom are legal permanent residents. AMIS also provided $3,000 in financial support for legal fees and an additional $400 to enable Mr. Martinez to obtain his work permit.

Walter Malara Martinez is now reunited with his family, living with legal status, and awaiting the opportunity to begin working in New York state. He extends deep gratitude towards AMIS and the attorneys who processed his appeal and secured this win! Thank you to all who contributed (especially his caring and competent attorneys) and those who financially supported AMIS, allowing us to help individuals like Mr. Martinez win their asylum cases. 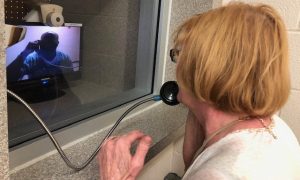 Why We Support AMIS: Gary and Melody

Before we met Ansly Damus, my wife Melody and I were not involved in immigration issues except as concerned voters. Like many people, our concerns grew as we watched the last administration spiral down to more and more cruelty.

Why I support AMIS: Pat

Meet Pat, a founding donor and ongoing supporter of Americans Making Immigrants Safe (AMIS). She attributes her commitment to immigrant support and advocacy to her family history, with Irish Catholic