On the night of December 31, 2018, when many people in the village of Yirgou in the country of Burkina-Faso were preparing to go to church to pray for the new year, soldiers entered the village, torched it, and murdered many people.  Three young men (names protected for privacy) who are now in the Youngstown prison all fled their country because of this massacre and eventually made their way to the California/Mexico border where they requested asylum. The U.S. Border Patrol and ICE flew them to the Youngstown prison where they’ve lived since May, 2019. 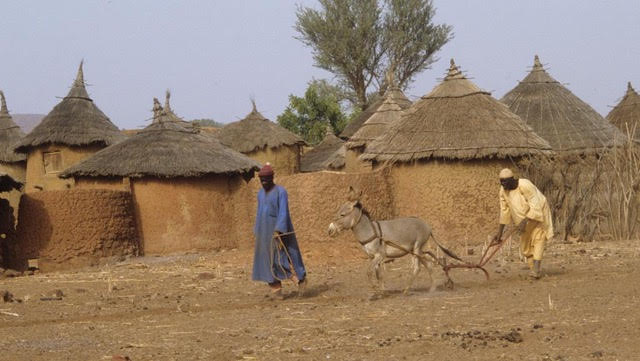 E.S. was with his parents on the evening of Dec. 31, 2018.  When the torching of the village and the murders began, E.S.’s father ran out of their one-room home to see what was happening.  The soldiers shot him. When E.S.’s mother ran out of the home to help her husband, she, too, was shot. Both died. E.S. escaped by running out of the village and then walking until he came to the capital of Burkina-Faso,  Ouagadougou, where he hid in a neighborhood. He eventually went to the airport where he slept until he was able to buy a ticket to Ecuador. (Ecuador does not require a visa to enter the country.) E.S.’s father had earlier gotten him a passport because he was saving money for his education.  From Ecuador, E.S. travelled to the California/Mexico border where he immediately asked for asylum upon entering the U.S. E.S. is a farmer, has no formal education, speaks the Moore language, but does not read or write. He would like to go to school. He was an only child and has no family members in Burkina-Faso now that his parents are dead.  The year prior to the torching of his village, men came to his home looking for his father but when they didn’t find him, they beat him up. He still has regular headaches and scars from the beating. E.S. is a Christian. He is 26 years old.

I.L. was at a soccer game the night of the massacre in Yirgou.  He was a farmer and a truck driver. When the shooting and chaos began, he drove his motorcycle to Ouagadougou because he was scared and wanted to avoid the soldiers.  After a few days he returned to Yirgou to find that his parents, wife, and young daughter had all been killed. His home and truck were burned. He had sent his three sons to live with his sister so they could attend school in another city because there was no regular school in Yirgou.  He wanted his sons to have the education he never had. So, his sons were not in the village when the massacre occurred and they still live with his sister, but do not know whether I.L. is alive or dead. After the massacre, he was afraid to visit them because he thought the soldiers might follow him and kill him and the boys.  If he had not gone to the soccer game, he’s sure he would have died with the rest of his family. While in Ouagadougou, a kind man took him into his home and advised him to go to Ecuador because it’s an easy country to enter. From Ecuador, he too, made his way to the California/Mexico border where he requested asylum. I.L. is 37 years old, speaks but does not read or write in the Moore language, and knows a very little bit of French.

I.K. was working in his family’s store when the shooting began on December 31, 2018, in Yirgou.  When everyone started running, he ran with some of them for hours until they reached a nearby village. He stayed there until the next morning and then returned to Yirgou where he found his mother, father and two brothers all dead.  They had been shot. They had not yet been buried so some other villagers helped him bury them. His home and store had been burned down. He was afraid the soldiers would return so after two days, he went to Ouagadougou where he found someone who could give him papers to get to Morocco.  He was afraid to stay in Burkina-Faso because he thought the soldiers would kill him, too. He went to Morocco and then flew to Brazil. From Brazil, he travelled through Columbia, Panama and up through the Central American countries to reach the Mexico/California border. I.K. is a Muslim and a member of the Mossi ethnic group.  He speaks Moore but does not read or write. Prior to working in the family store, he worked as a cattle farmer. He is 26 years old.