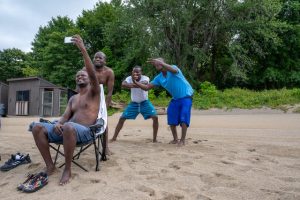 The near-constant smile on Jonas Nsongi Mbonga’s face belies the arduous, heartache-filled journey which brought him from his original homeland in the Democratic Republic of Congo to his current home in Cleveland Heights. Jonas’ story has been well recounted in a June 30 Freshwater Cleveland story, available through this link.

While AMIS, Inc. has been directly involved in Jonas’s life for just over two years, many of its trustees and supporters have ties that go back to his 21-month detainment, most of which he spent in a privately-run, for-profit detention center in Youngstown while awaiting his asylum interview.

Jonas’ story lays bare the brokenness of U.S. immigration policy, seemingly designed to benefit private prison operators rather than the asylum seekers and other detainees they house. As the Freshwater Cleveland story so starkly illustrates, 70% of detained immigrants are held in privately-run, for-profit detention centers like the CoreCivic prison in Youngstown, where Jonas was held, the second largest for-profit prison in the United States. In 2019, it earned  29% of its revenue or $ 579.4 million from ICE contracts.

Fortunately, ICE no longer uses the Youngstown prison to house detainees.  Another key revelation in the Freshwater story is how racial bias influences asylum case rejections, the likelihood of solitary confinement detention, and the length of detainment.

Jonas’s asylum hearing detention profoundly impacted both his physical and mental health. He endured a steady diet of unhealthy and culturally foreign food, lack of regular exercise, daily prison indignities, and witnessed many prison horrors, including the suicide of another detainee. But unbeknownst to him, he was not alone, thanks to Cleveland’s dynamic and growing immigrant support network. Generous gifts were contributed to AMIS on Jonas’s behalf from the Church of the Savior, Catholic Community Foundation, Trinity Cathedral, St. Paul’s Episcopal Church, and the AMIS general fund itself. In June 2020, AMIS’s Jonas Nsongi Mbonga fund was established. Over the past two years, this fund has enabled AMIS to offer modest monthly support to Jonas ranging from rental assistance to medical fees. To his credit, Jonas’s belief in a better tomorrow ultimately overcame his many obstacles and the day finally arrived when he was released from the Geauga County Jail on April 29, 2020. The Fairmount Presbyterian Church has generously provided housing for Jonas over the past year.

Ever grateful to be safe in his newly adopted hometown, Jonas readily gives back to others in need, serving as a translator for newly arriving immigrants and delivering food and other goods to a family supported by AMIS. We are grateful to have Jonas as a member of our community and proud to have played a role in helping him become established here.