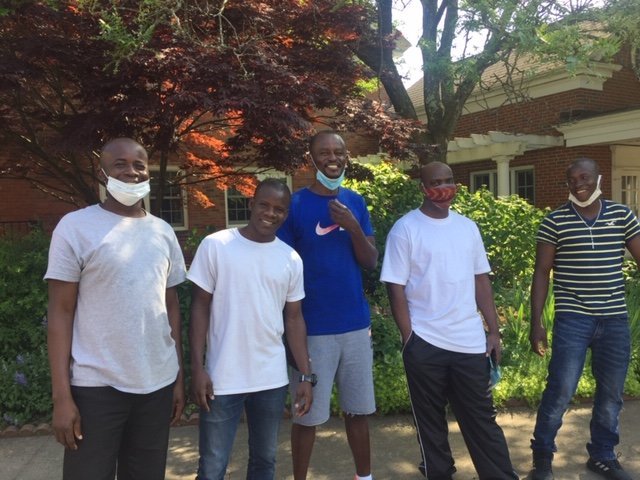 Each time you support AMIS Ohio with donations, support, emails and social media sharing our “freedom family” grows. Most recently, your efforts helped bring freedom for Jonas, a 30-year-old asylum seeker from the Democratic Republic of Congo.  He fled the Congo in 2017 after being severely beaten and detained by corrupt government officials when he refused to support them.  Making his way to the California/Mexico border, he legally requested asylum with a U.S. immigration officer. The Border Patrol then detained him in July 2018 and sent him to the Youngstown maximum security prison where he stayed until February 21, 2020, when he was moved to the Geauga County jail.  Jonas has never committed a crime.

When the ACLU Ohio won a habeas corpus petition based on the dangers of COVID-19 for detainees who have underlying medical issues, Jonas was finally set free.  He was released on April 30, 2020 and went to live with immigration activist and attorney Brian Hoffman in Wooster, Ohio.

A bright young man who would have liked to become a pediatrician if given the opportunity, Jonas speaks 5 languages fluently, including French and Portuguese. The Geauga County corrections officers called him “a model inmate and a peacemaker” in the jail.

Maureen DeVito, an attorney with Catholic Charities, is assisting Jonas with his application for a work authorization. And with the help of many generous supporters, Jonas recently moved into an apartment with Ansly Damus, the original asylum seeker who inspired the launch of AMIS, Inc.

A local grassroots group, Heights Friends of Immigrants, donated a bed and mattress, sheets and blanket, a chest of drawers, table and chairs, a bike, computer, phone & service, and a fan.  In addition, AMIS was able to provide funds to cover Jonas’ share of the rent and provide him with money for food and toiletries until he can get a work permit.  On a recent Saturday afternoon Anne Hill, Ansly and Jonas road their bikes to Forest Hill Church to visit Emanuel, Issoufou and Idrissa, the three men from Burkina-Faso who had been in jail with Jonas. It was a joyous reunion!

AMIS is so grateful for the support of our community that enabled us to assist Ansley, Jonas, Emanuel, Issoufou, and Idrissa’s release from prison and setting up a new life with freedom, goals, friendships and dreams of their own.

Thank you to everyone who has contributed to their needs over the past couple of years.  A special thanks to volunteers Jeff Smith, Melody Hart, Gary Benjamin, and attorneys Maureen DeVito and Brian Hoffman.