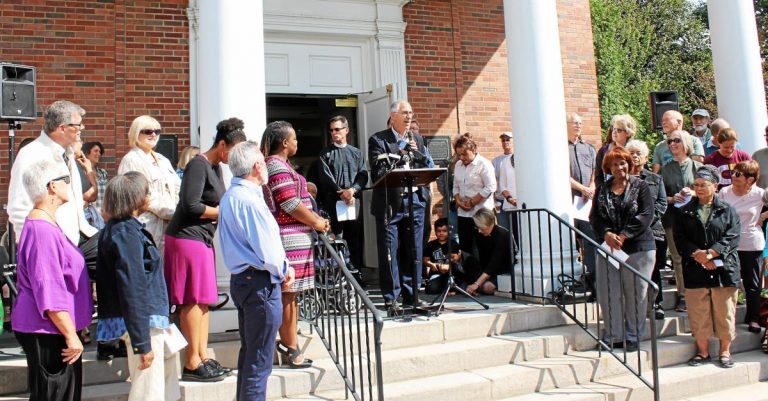 Now in her early 40s, Leonor has lived in the United States all her adult life. In her early 20s, in California where she lived at the time, someone claimed to be an attorney who wasn’t, took her money, and was unable to legally assist them, thereby obfuscating her path to citizenship. This act of misfeasance would have long term repercussions for Leonor. She and her partner, Jose, eventually moved to the Akron area where they raised four children, all U.S. citizens, and Jose established a successful landscaping business that took care of the family’s needs.

In 2017, ICE suddenly became aggressively insidious in their enforcement of immigration laws. Leonor had for years been reporting monthly to the local ICE office, as required, with no cause for concern. Then, in August 2017 she reported in again. This time was different. ICE told her that they would not ensure she would be allowed to remain in the U.S. ICE put an ankle bracelet on her and told her to return to their office with an airplane ticket to Mexico.

Frightened, Leonor reached out to HOLA who began searching for a safe place for her. She soon found sanctuary in an apartment within Forest Hill Church, Presbyterian in Cleveland Heights. There for 2 years and 2 months Leonor and her family were supported, cared for, and loved by a well-organized network of church volunteers.

After a long wait, Leonor has a temporary work permit and has been approved for a U-Visa but like thousands of others, she is waiting for it to be issued. Leonor returned home to Akron to live with her family. About two months after returning, her world took another dramatic turn. Early one morning while driving to work, ICE working with local law enforcement stopped Jose, put him in custody and deported him to Mexico. The bread winner for the family and the father of four children, ages 6 to 21, was gone; unable to return.

In response, the church raised funds to help them financially. In November 2019, AMIS featured Leonor in the fund-a-need portion of our fundraiser, “Easing Burdens, Offering Hope.” Consequently, AMIS added nearly $9,000 to the fund at Forest Hill to help Leonor and her family. Recently, AMIS purchased new Chromebooks for Leonor’s two youngest boys for their online school classes.